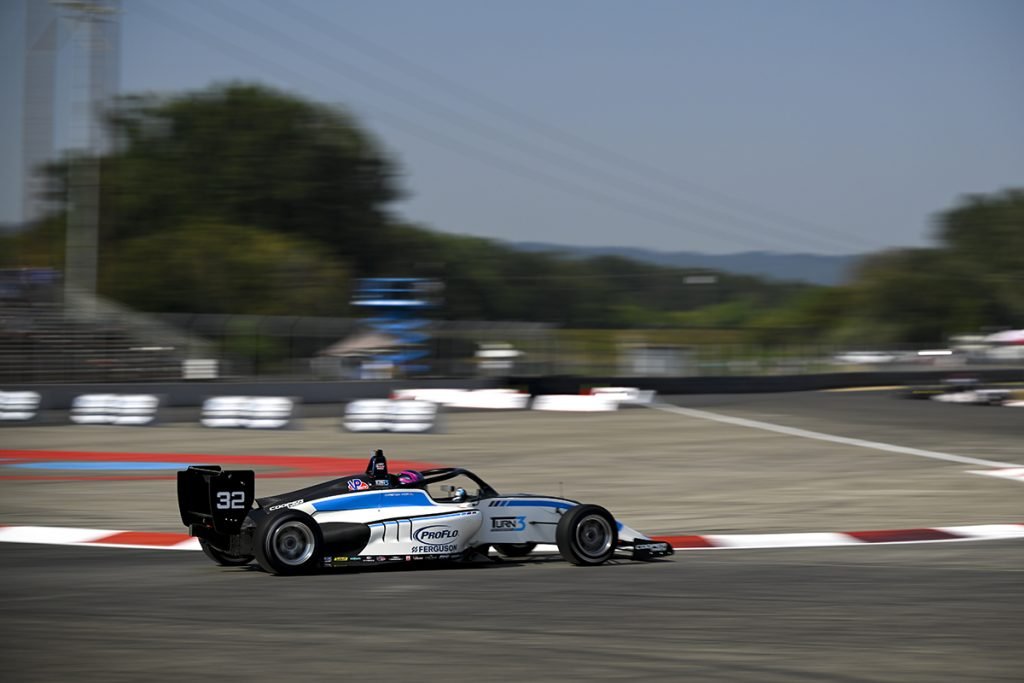 Christian Weir Ends the USF2000 Season with a Podium

This Labor Day weekend marked the end of the Cooper Tires USF2000 Championship season with a triple header at Portland International Raceway. Repeat podium finisher Christian Weir added another third-place result to his many accolades earned this year in the last race of the weekend.

Weir, qualifying 11th on the grid for race one, had some pace to make up if he was going to get the podium he so badly wanted. As luck would have it, a collision in front caused him to redirect his course off the track to avoid hitting those in front of him, pushing him further down the running order. After making up a few positions, Weir was then tapped from behind by a fellow competitor causing both cars to veer off course. With 15 laps left to make something happen, Christian was able to work his way back to his original starting position of 11th, ending his first wheel-to-wheel race of the weekend.

Later during Friday’s scheduled day of activities and as the second race of the weekend inched closer, the schedule began to get pushed back due to a delay in the INDYCAR practice. Eventually, the race was rescheduled to the end of the day but that didn’t shake the young driver who jumped up to fifth place early on and held that position through the checkered flag. Adding a P5 result and some valuable points towards the end of the year championship, momentum was on Weir’s side as he looked to the final race of the weekend and season Saturday morning.

Tension was high on Saturday as the crowning of a new USF2000 champion was near and the young drivers were the first race on track early that morning. It was time for Weir to give it everything he had to close the season strong. Starting eighth, and as cars piled up ahead of him in the treacherous turn one of the Portland International Raceway, he was able to make a quick jump up to sixth before a full course caution. Once clean-up was done and the green flag was back out, Weir was able to jump three more spots ahead and onto the third and final step of the podium.

“We were really hoping to go out with a bang, and we did just that! It was tough in the beginning of the weekend with contact,” explained Weir. “Going into the final race we knew we found some speed in the car and just held it throughout the race.”

Christian Weir ends his 2022 season in the eighth position out of a total of 31 drivers that have taken the track this year.

Reflecting after the race, Weir had nothing but gratitude for his team and sponsors saying, “I just want to thank the team and my sponsors so much for this season and this weekend. It was a great pleasure working with them, and I look forward to the future.”

It’s still unsure where this driver will take his talents next year, but you can expect him to be a top competitor in any series.

Christian Weir would like to thank all his 2022 partners for their continued support. A big shoutout to Ferguson, ProFlow, eComfort and Motorcars of Palm Beach. A huge thank you to Turn 3 Motorsport for all the help and support in the open-wheel side of his program.