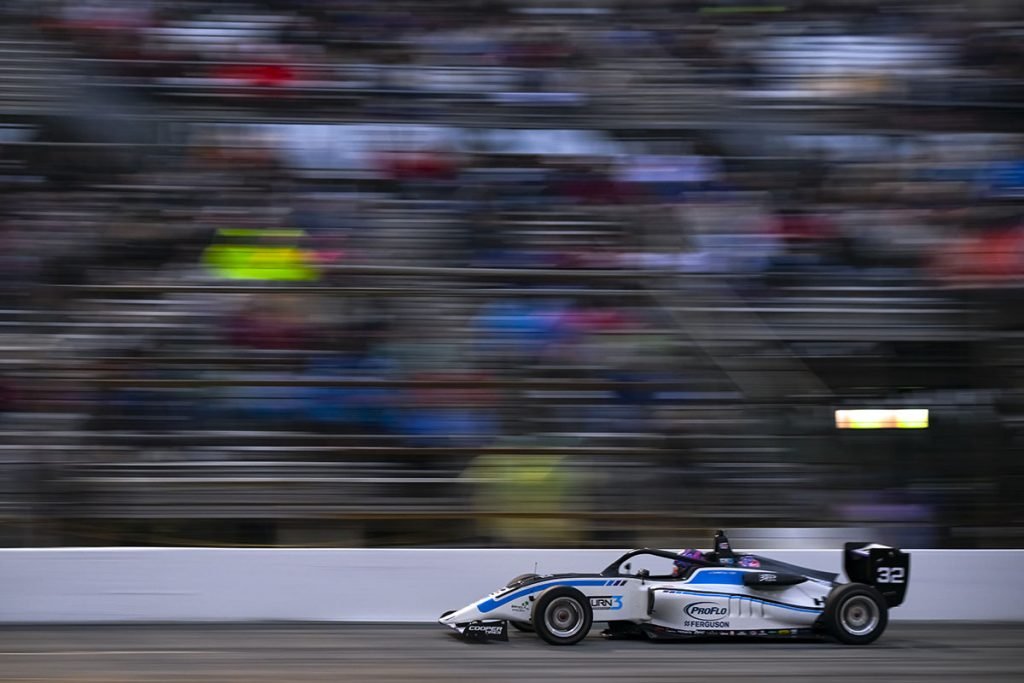 It was the one and only oval race of the season as Turn 3 Motorsport driver Christian Weir took on the short and fast Lucas Oil Indianapolis Raceway Park for the USF2000 Championship Presented by Cooper Tires. Taking place during the Carb Night Classic, Illinois resident Christian Weir drove to an eleventh place finish and logged some more laps in oval competition.

After a pair of quick practice sessions on Thursday once torrential rain subsided, Weir went on to score the eleventh fastest time of the two lap average timed qualifying session. Set to line up on the inside of row six for the Carb Night Classic Cooper Tires Freedom 75, the attention would turn to Friday and the early evening race.

After a quick fifteen minute practice session that saw Weir turn the fastest lap of the session, more rain would move through the area late in the afternoon forcing the wheel-to-wheel racing to be delayed ninety minutes. As crews went to dry the race surface and make it safe for teams and competitors, excitement was mounting for the only oval race of the season.

“I am ready to get going,” explained Weir. “Seems like 2022 has been the season of rain delays. I think we have a good car, but it is so difficult to pass here so we will see what we can do.”

As the field took the green it was two-by-two for the first couple of laps, but drivers eventually settled into rhythm and worked themselves into position. Running just outside the top-ten, Weir experimented with racing lines as he tried to move his way forward. With the field tight in pace, overtaking was difficult, and Weir would pilot his Turn 3 Motorsport entry to an eleventh-place finish.

Weir added, “For sure it was not the result we wanted or were hoping for, but it was another event of logging race laps as well as gaining experience and knowledge that will for sure help me in the future. A huge thank you to Turn 3 Motorsport, Richard Lyons for all his advice and coaching as well as all my partners who make everything possible. Next stop, Road America.”

It will be less than two weeks away from his open wheel USF2000 machine as he shifts his focus to Road America and the June 10-13 event in Elkhart Lake, Wisconsin.

Christian Weir would like to thank all his 2022 partners for their continued support. A huge shoutout to Ferguson, ProFlow, eComfort and Motorcars of Palm Beach. A huge thank you to Turn 3 Motorsport for all the help and support.