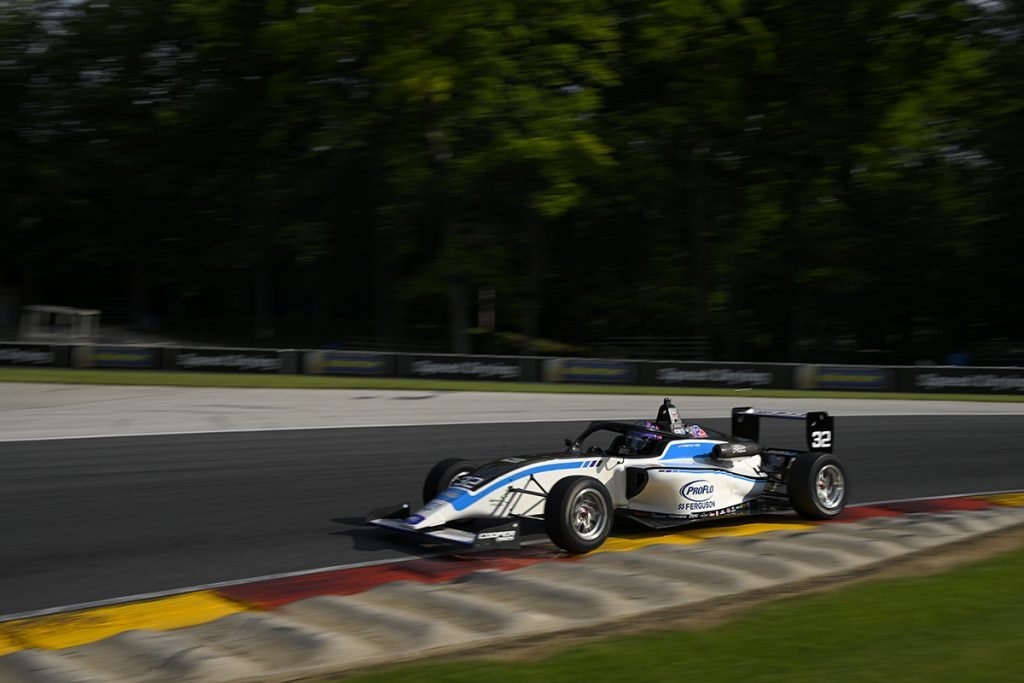 This weekend at Road America marked the start of the second half of the Cooper Tires USF2000 Championship 2022 season. Despite not having claimed a podium finish at the Grand Prix of Road America doubleheader weekend, Christian Weir was the talk of the paddock solely for his on track performance, more specifically his ability to overtake, having made 15 total passes in both races this weekend.

The Grand Prix weekend started out on Thursday with two test sessions for the USF2000 drivers, allowing them to get familiar with the 4.048 mile long, 14-turn road course. Christian knew he needed to bring it in the race in order to pull off a good result after a less than average pair of qualifying runs.

“We started out a little slower than anticipated in testing, but we’ve been able to improve through every session we’re on track so hopefully we can pick up some speed and positions in the races,” explained Weir after qualifying 15th and 18th.

A cold front rolled in Saturday morning, changing track conditions from the previous sunny, warm weather to cooler with scattered rain showers throughout the day. These conditions, however, seemed to have been in Christian Weir’s favor. Starting in 15th, Weir was able to make his way up the field early on. Only three caution laps the whole race allowed him to earn a top-ten in P7, an eight position gain from where he started.

“I knew I had to make something happen,” says Weir, “We didn’t have the starting position we wanted, so there was no choice but to push through the field.”

A few hours later in the day, the USF2000 drivers lined back up in their starting positions ready to go for race two on the weekend. Having one race already under his belt, Weir knew he had the ability to push hard through the field again. The toughest race of the weekend, and perhaps the most eventful of the two, had only five green flag laps out of the eleven total circuits around Road America with a red flag toward the end of the race due to weather conditions around the track. Despite having little time to better his race position, Weir was able to pull off an 11th place finish, seven spots better than his start position.

Weir and the team are aiming to get back on the podium at their next race at the end of the month in Lexington, Ohio. He will be on track Thursday, June 30th through Sunday, July 3rd. Follow along on his social media pages on Facebook, Instagram, and Twitter for schedules updates, and results.

Christian Weir would like to thank all his 2022 partners for their continued support. A huge shoutout to Ferguson, ProFlow, eComfort and Motorcars of Palm Beach. A huge thank you to both Turn 3 Motorsport for all the help and support.