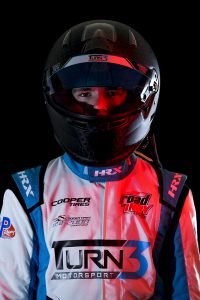 After suffering a broken back in a freak single car incident at the end of the 2021 race season, Illinois resident and Turn 3 Motorsport driver Christian Weir is primed and ready for the season. As a sophomore entering the USF2000 Championship Presented by Cooper Tires, Weir is looking to build upon a very successful 2021 campaign as he has his sights set on race wins and podiums in 2022 beginning this weekend at the Grand Prix of St. Petersburg.

“I am fully recovered and ready to go for 2022,” expressed Weir. “Despite less testing than we had hoped, I feel confident heading into the first wheel-to-wheel action of the season. I owe a huge credit to all the people around me including my Manager Richard Lyons for keeping me on the right path, PitFit Training for getting me back into race shape, Turn 3 Motorsports for the support and patience and all the people I have around me. It’s going to be a good season.”

Dabbling in several different of motorsport programs in 2021, Weir is fully focused on climbing the Road to Indy ladder and onwards to the NTT INDYCAR SERIES. Embarking on his second season in the USF2000 Championship, the goals remain the same.

Weir added, “I want to win and am driven to doing the best I can. The USF2000 program is so competitive that this is not an easy task. I can’t help but to look forward to 2023 and a possible progression, but first and foremost, I want to be successful in 2022 and help keep the Turn 3 Motorsport brand at the top of the time sheets.”

“While other programs can help you with seat time, the USF2000 series provides the most competition and to be the best, you must beat the best,” continued Weir. “We race at some of North America’s best tracks, some of the most prestigious venues and alongside INDYCAR, so what more can you ask for…Other than race wins and podium results which is the goal in 2022.”

Weir will begin the quest to achieve his goals this coming weekend at the Grand Prix of St. Petersburg. Competing at the famed street course, Weir will hit the track on Thursday afternoon in preparation for a weekend that will feature a pair of wheel-to-wheel races. Interested in keeping up with Christian Weir and Turn 3 Motorsport? Stay tuned to all the action via the Christian Weir Racing social media pages.