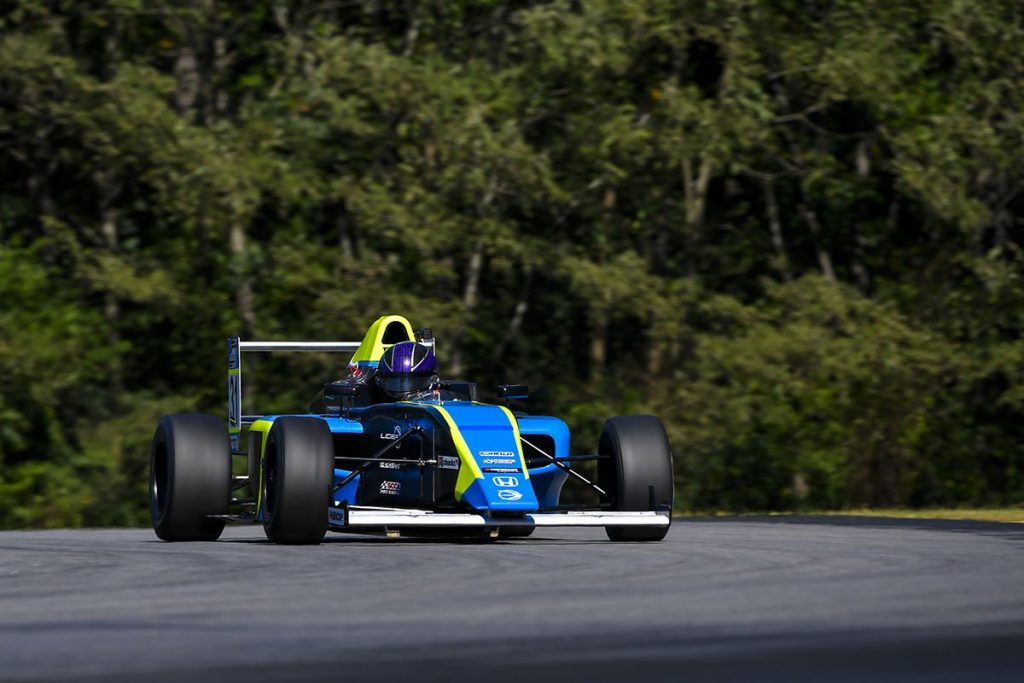 Making his F4 United States Championship Powered by Honda debut this past weekend in a combined effort with Gonella Racing and Turn 3 Motorsport, Christian Weir garnered his first podium result in his first race. Taking on the ultra-fast Virginia International Raceway (VIR), Weir was atop of the charts in practice and backed that speed up with a pair of top-ten finishes including a third-place podium result in race one.

“What a weekend,” expressed Weir. “I celebrated my fifteenth birthday on Friday and was on the podium on Saturday. Would have loved to score a birthday win but a podium was great. A huge thanks to Gonella Racing and Turn 3 Motorsport for the help, support and efforts to fast track my learning and experience to allow me to fight at the front of the field.”

After showing speed in pre-event testing, Weir clocked the fifth fastest time in qualifying with a lap of 1:55.81 to start the first wheel-to-wheel action from inside row three. Battling hard at the front of the field amongst much more experienced drivers, Weir held his own to cross the stripe in fourth, his first career F4 US Championship top-five finish. Following the race and a length review of driving infractions in front of him, Weir was promoted to the third step on the podium when a fellow competitor received a penalty.

Looking to repeat or better his success in race two, Weir led the first four laps and was in contention for the win in Saturday afternoon’s race. Unfortunately, contact with another driver damaged his Gonella Racing entry and he was forced to retire.

Returning to the track on Sunday, Weir would be forced to start race three from the 15th position as the grid was set on the fastest lap from the previous race. Only finishing a handful of laps put the youngster behind, but Christian took it all in stride.

Weir explained, “I set a simple goal for myself when I saw I was back in 15th and that was to move forward as far as I could, pass as many cars as possible and complete every race lap. In the end, I was able to come home eighth.”

Turning heads throughout the weekend, Weir will look to climb further up the podium at the next F4 event at the famed Circuit of the Americas. Competing alongside the Formula One World Championship, Christian will reset his goals and set out to achieve them in the championship finale.

Next of for Christian Weir will be the Mid-Ohio Sports Car Course this coming weekend for the Cooper Tires USF2000 Championship finale. To keep up to date with news, photos, results, and information on Christian, please follow him on social media by searching ‘Christian Weir Racing’.