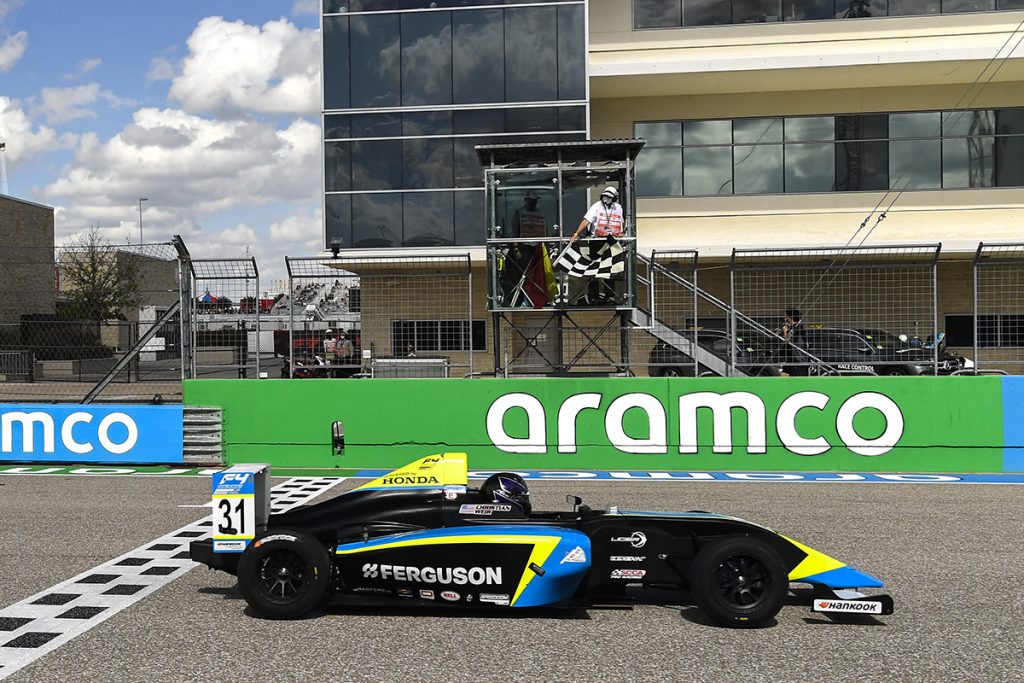 Christian Weir Stands on Podium at the Circuit of the Americas

After a podium result at the Virginia International Raceway (VIR) in his most recent F4 United States Championship Powered by Honda event, Christian Weir was back with the Gonella Racing / Turn 3 Motorsport outfit for the series finale this past weekend. Taking on the Circuit of the Americas (COTA) alongside the Formula One World Championship, the pinnacle of worldwide motorsports, Weir was able to stand on the podium Saturday before being sent to the hospital on Sunday.

“What a great feeling to stand on the podium at COTA,” exclaimed Weir. “I knew we had the speed to run at the front of the field, but this is on a track that I have not yet competed on, so I wasn’t expecting that kind of performance until race two. A huge thanks to all of my supporters and partners for allowing me to chase my dreams.”

With the fifth fastest time in the one and only practice session on Friday, Weir returned to the track Saturday in the #31 Gonella Racing entry to claim the fourth quickest lap in qualifying to lead the American contingent of drivers. Set to start on the outside of row two for the run up the hill to the first corner, Weir was promoted to P3 on the starting grid courtesy of a fellow competitor’s penalty from a previous event.

Weir added, “I had a good start and was able to stay close to the front of the field and keep the leaders in sight. I was boxed in and fell back to fourth, so I just had to keep moving around to find a place to go. As the race went on, the draft was playing a huge factor here so I was just biding my time to see how everything would shake out and eventually crossed the line in the third position. It was amazing to compete in front of so many fans and to do so with a strong third place performance was even better.”

Back to the track on Sunday and with momentum on his side, Weir lined up from the seventh starting position in the final event of the 2021 season. Aiming to finish strong, a less than average start and some side-by-side racing saw the Gonella Racing driver fall back to the eighth position. Working his way forward and trying to gather a top-five finish to end the season, Weir was involved in a single car incident as he was pushed off the track and over the curbing causing an injury

“Christian had received contact a few times from another driver leading up to the accident, and I radioed him to switch passing strategy, but it was too late.  He got pushed wide for a final time and was then airborne. I knew it was going to hurt as I have had and witnessed this type of accident before.  Fortunately, although a severe injury, a compression fracture to T4 & 5, he’ll be back on his feet and behind the wheel in a few months,” explained Richard Lyons, coach and mentor. “A shame to end the year on this note as he’s had such a fantastic year up to this point.  We are now looking forward to some big announcements this fall and winter.”

Weir added, “It will be a long eight weeks on the sidelines, but I am a racer, and I will be back. The number one motivation for me is success, and I can’t wait to start my 2022 prep work, albeit a little delayed for the time being.”

Christian Weir was set to be back at the Indianapolis Motor Speedway for the annual Chris Griffis Test this coming weekend but is forced to sit on the sidelines for the next month or so.