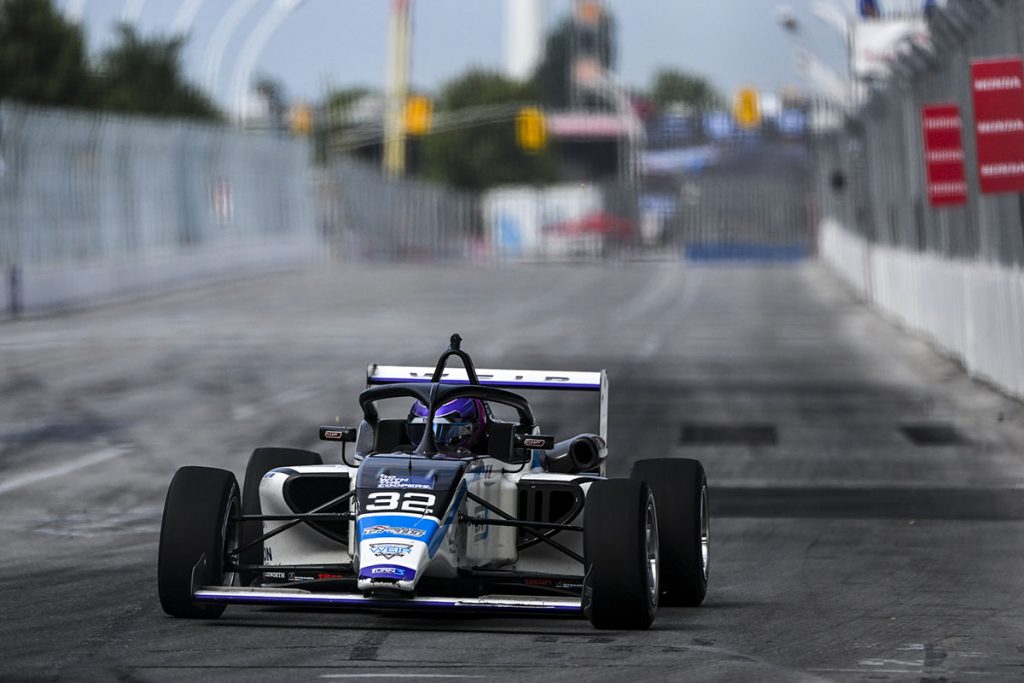 It was Christian Weir’s first trip to the Streets of Toronto as he took on the 1.78-mile temporary street circuit around the famed Exhibition Place. With the Honda Indy Toronto off the schedule for the last two years due to the Covid-19 pandemic, the barrier lined circuit would be a new venue and an equal playing field for all drivers in the Cooper Tires USF2000 Championship.

With a strong run in the one and only practice session of the weekend, Weir started his weekend off with great pace earning the second fastest lap and was excited to shift his focus to the first qualifying session Friday afternoon. With Friday’s session setting the grid for Saturday’s wheel-to-wheel racing and Saturday morning’s qualifying setting the grid for Sunday morning, Weir earned a P6 and outside row three starting spot for race one while difficulty with contact during qualifying two would see the Illinois resident start Sunday’s race from P15 on the grid.

Race one would see an intense battle in the top-ten as drivers swapped positions throughout the 20-lap caution free race. Falling back early and moving forward later, Weir crossed the line in eighth to add another top-ten result to his racing resume.

“Not the result we wanted in race one, but we will have another chance tomorrow in race two,” expressed Weir. “It was great to earn another top-ten, but I want to improve on that tomorrow despite the difficult task by starting deep in the field.”

Rolling off the grid Sunday morning from inside row eight, Weir battled his way forward and was in contention for a top-five result. Showing an increase in pace from his qualifying performances, Weir was becoming more and more comfortable with the tight confines of the barrier lined circuit. Despite battling for a top-five result, Weir would cross the line in the ninth position.

With a pair of top-ten finishes, Christian Weir moved to eighth in the Cooper Tires USF2000 Championship standings.

With a seven-week hiatus before traveling west for the final event of the 2022 season, Christian Weir will head to the Portland International Raceway over the September 1-4 weekend for a triple header race weekend

Be sure to follow Christian Weir on all his social media pages for news, information, photos, and results.

Christian Weir would like to thank all his 2022 partners for their continued support. A big shoutout to Ferguson, ProFlow, eComfort and Motorcars of Palm Beach. A huge thank you to both Turn 3 Motorsport for all the help and support.