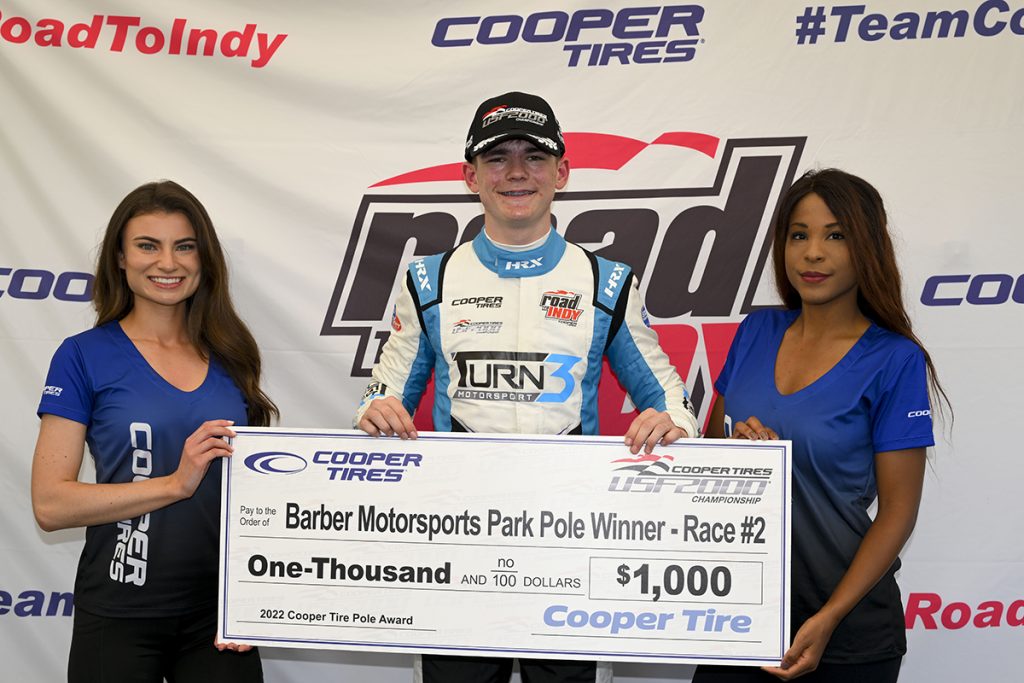 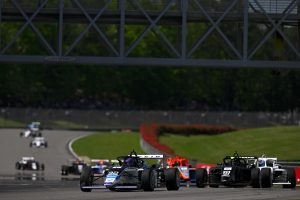 Running his black, white, and blue ProFlo Ferguson sponsored Cooper Tires USF2000 Championship car on the hills of Alabama this weekend, Christian Weir proved he’s a serious contender in the series, remaining in the top-ten all weekend long, securing a pole position and a podium result. Prior to the race, Weir’s USF2000 experience with Barber Motorsports Park had been short, only testing once in April and with one practice session this weekend.

After a successful test session, it was time for qualifying for the first race of the weekend and Weir was able to turn the eighth fastest lap and secure a row four starting spot for Saturday’s wheel-to-wheel action. Returning Saturday morning for qualifying prior to the first race, Weir pushed his Turn 3 Motorsport entry to the top of the charts and claimed his first career Cooper Tires USF2000 Championship pole position.

“What a feeling it is to garner my first pole position,” exclaimed Weir. “While I have to wait until tomorrow to start from the front row, this afternoon I will look to move forward from row four. I can’t wait to go racing.”

Starting Saturday’s round three from the eighth position, Weir had another improvement when the green flag flew, moving his way forward to cross the line in seventh. Despite a valiant effort to make headway into the top-five, the challenging field of drivers and difficult to pass facility halted any progress further forward over the twenty-lap race.

Weir added, “The first race of the weekend was good. We were able to stay out of trouble, move forward and gain experience for tomorrow. We will be shooting for the top spot tomorrow to make it a good weekend!” 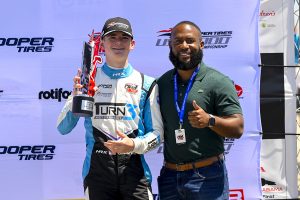 Shooting for a top spot they did, after remaining toward the front of the pack in qualifying a red flag was waved late in the session allowing Weir to take the pole position with about five minutes remaining. Keeping steady and holding off many contenders behind him, Weir ended qualifying with the top spot!

Carrying that pole position excitement into Sunday’s race, the Illinois resident was ready to compete. After a short weather delay, the race was on, as Weir tried to maintain his position at the front. Falling back two places to third in the first lap after slight contact in turn five pushed him off the racing line, Weir remained steady throughout the second race of the weekend and claimed the third step on the podium, his first career Cooper Tires USF2000 podium result.

Weir added, “It was a weekend of firsts for me. I can’t wait to try and carry this momentum into Indy in just a few weeks’ time. I think if I was able to avoid the contact on the opening lap, we could have scored our first win. The field is so close and tough, it was just hard to regain the lost track position. On to the next one.”

Christian Weir would like to thank all his 2022 partners for their continued support. A huge shoutout to Ferguson, ProFlow, eComfort and Motorcars of Palm Beach. A huge thank you to both MDK Motorsports and Turn 3 Motorsport for all the help and support in running a dual series program.